I am careful that my thoughts do not idle on the moving light in the sky, after all, my thoughts are not my own; most of my thoughts are beamed into me via The Brain Blanket. The TBB is reliable and stable, it emits peace throughout The Haven, I fear how non-compliant the population would be without it. The moving light in the sky; is this thought permissible? It is incessant and has not been phased out of my brain's cycle yet, am I the only unit who is vigilant of this? I'd rather think about The Provider; who has allowed my presence through his loving productivity, upon his divine conveyer. Only The Provider knows my purpose, although, I choose to think that I am of his audience; we are all of his audience.

An explosion of laughter follows GK003's analysis to J model's inept performance in the cube stacking challenge. J models are inferior units, but L models like myself would not affirm this directly, it is not an L model's protocol. Watching the Real Screen soothes my brain, my brain is useful, but can be somewhat obnoxious. I do not need my brain's participation at all times. The Real Screen is the most integral to me, it programs routine and modalities. It has a vast array of programming to choose from and is navigated via the Wrist Remote.

The first channel, consists of typically question-oriented programming, units are asked relatable inquiries and the audience reacts accordingly. A surrounding batch of units leer upon only one; the one unit must comply and answer correctly or face disassembly. It is stated that The Provider provides the questions, and it is stated that every unit is subjected to this eventually. The Provider is without error.

The next channel, consists of data that relates to what is beyond The Haven. This is a very alarming channel, hostile organic units and other dangerous animals are said to prowl beyond our barrier. The channel highlights the "Imperative of Compliance" to ensure the security of The Haven. There is a very un-easing ting sound persistent on this channel, I can hear it phase though my ears, that makes it almost unwatchable at times. The narration is relayed slowly at a seemingly disjointed pace, I am always guessing what is next to be said.

This channel; the fourth, is the channel for laughing, what I usually ingest, it ensures the appropriate moments to laugh via a useful backing, it is enjoyable to laugh as one. Units are put through amusing obstacle courses and dissembled if they fail. Currently, I am watching a J model being disassembled who will not remain silent, but the laughing quickly overpowers its noises. The violently contorting unit had become basted in its own indistinguishable wastes; flailing, being pulled and pushed about by the mechanics. I could not register the instance when the unit's occupation had fled. Popular personality model units such as GK003 and RI002 often commentate, both of whom are impressively loud, they speak from a diverse catalog of voice commands.

The final channel, known as "Love Entertainment Tonight" or LET, is only active in final time quarter, and is only permitted for units in blue-stage and above. LET is a strobe of visuals that appear to be the dynamics of unrecognizable units, with such polished and exaggerated forms. LET is extremely captivating, though difficult to recall.

I detach myself from The Real Screen; and calmly encircle its cable to the side. A meandering ring slowly dissipates from my brain.

My sub-components and I are dressing ourselves with our neutral body suits, NBS. The suit encompasses the proportions of the unit and its overall tone is a optimal soothing grey. "The NBS is a Uniform for Units", they are stylish and identical. Eyes are designed to peer through its UV-proof spherical lenses, and it is impossible to speak through the NBS, as it plugs into the roof of the mouth. Biting down secures the facial shell; keeping it in its place. Instead, it has an excess of communication strategies via an array of lights; a sleek arcing band that extrudes elegantly from the facial shell of the NBS, choose from over three colors. Examples for the colors are as follows:

Red: "The situation is warranted"

Blue: "The situation is permissible"

The rate of flashing tends to indicate the level of enthusiasm, at least this is how I understand it.

A lapse in memory; I can assume my sub-components have been dispatched and are addressing their sub-component activities.

Green fluorescence jets across the stoic continuum of Cubic Rooming Containers (CRCs), the light's charming subtle flutter reaches onto the transport conveyers aside them. I exit my CRC's frame, then I simply idle and I am whisked towards my destination; I, now we, proceed through an electrical mist; courtesy of a bi-product induced by the TBB's functionality. During this my vision becomes altered, there's a ubiquitous softening and my brain's thoughts become limp, and tangled. Passing through the veiled and mazed Automized Conveyor Traffic System, ACTS, I can see obfuscated flickers of color swarm about, bridging between my peripheries; shifting to and from myself. It's beautiful, why I could not explain.

I pass a sign which states: "L3000-L5000 EXIT". This requires a mere stepping off the conveyer; it is not uncommon to stumble during the process, considering the effects of the TBB. Now, I transport myself in the usual way, a stepping pattern will deliver me to my UEZ, Unit Exertion Zone. My designated movement lane is rather quiet, statistically. My brain intercepts a signal, alerting me that I am nearing my destination; the closer I am the louder the signal. It sounds musical, an interplay of a thousand of spectral whispers, compressed into a harmonic sequence, eventually settling into a wavering hum.

The passage is very narrow, accommodating a single direction; elaborate towering walls of wet metals and dysfunctional gears made visible by the staggering occasional light source. A sliver of overcast provides damp rays; desperately reaching into the pathing. Along the way I encounter some presumably discontinued miscellaneous clogging my passage and therefore hindering the route's efficiency. Something uncommon within the debris acquires my attention. An item that appears to be a miniature of The Haven; and attached to diminutive turbines. Yet still, the component bears a striking resemblance to the infrastructure of The Haven's environment. I tuck the curiosity in a severed pipe about an arm's reach above myself along the rusted wayside, and brush the expendable portion down a shaft. A jolting in my wrist occurs, which infers that I've been stationary for too long, and that I must be on my way.

I arrive at the UEZ's departure station. It's unclear what exactly I do at or during my UEZ, but this being my purpose leaves me with no other alternative, this is what The Provider intends my function to be. Passing through the entrance, my NBS's electro-magnetic signature alerts co-units of my arrival, and with a lingering turn the units rotate successfully and acknowledge my presence, I am greeted by their blue and green greetings; a sense of belonging is registered. I then move onto the transport, and with that the monolithic platform detaches itself from the mechanical land mass.

My co-units and I drift into a devouring nothingness, and the somethingness we had departed from diminishes. Some time has elapsed and now the platform sinks; rather suddenly, plummeting through a series of atmospheres. This is perhaps the most abject aspect of the task. We then begin to skim over a seemingly infinitely flat grey, almost reflective, desolate which there is no activity on. This level is insulated by the opaque mylar like atmospheres above, compiling what is called the lowest sky. The lowest sky enables an incredible heat, but, The Provider, in all his majesty, has gifted us the NBS which withstands such odds. During the exertion process, our task is to monitor the region, to be vigilant of inconsistencies, presumably that is. The platform travels about in a randomized pattern, maintaining its very specific level from the surface. Its jarring pace is enough to catch a unit off-guard, causing them to be ejected from the platform. This is evident from the unoccupied units that are littered across the plain, and some of these unoccupied units are in unrecognizable NBSs, some which are not grey. Occasionally, I see units that had even discarded their NBSs entirely, but in all cases the body therein had not ventured far, and therefore their internal mechanics degenerated into a melted rot, staining the ground! The UEZ's excursion seems to become more difficult over time.

The moving light in the sky, it has appeared again. It stabbed through the lowest sky and floated just beneath it. Blinking and spinning faint beams of light, I had wanted to step off the platform, I had wanted to give chase to this impossibility. Was it The Provider, was it him? I then rotate towards my co-units, I desperately begin to signal in yellow, but they are non-responsive. I rotate as efficiently as I can back towards where the moving light had held my famished curiosity, but the platform shears upwards back to the UEZ departure station. And with that I had almost fallen off.

I re-associate with my sub-components and together we shed our NBSs. We swallow our Brain Life Tablets while enjoying the well deserved satisfaction given to us by The Real Screen. I swivel between the glossy loving eyes of my well adjusted sub-components and open my mouth. My tongue presses upon the inside of my left cheek, issuing a voice command: "I love you.". As the digitized sentiment escapes my mouth, a liquid is excreted from the corner of my right eye, which is likely a malfunction. My sub-components rotate toward one another, and begin to coordinate blinks, and begin chattering their gums. Green-stage units do not have a Speech Catalogue Augmentation Tablet installed in their mouths, so I suppose these actions were now typical of green-stage units. Slightly concerned, but doubtful of a conspiracy against myself, I direct them to the numb chamber.

The room abruptly becomes a delightful shade of black. My brain feels refreshingly emptied. I arrange myself vertically and proceed to follow the correct floor texture that correlates to the numb chamber. I arrive at the familiar transparent plastic sliding door that holds the familiar yellow gas within. Before I step inside, a thought of the moving light is considered; does it know that my brain is not permitted to think of it? 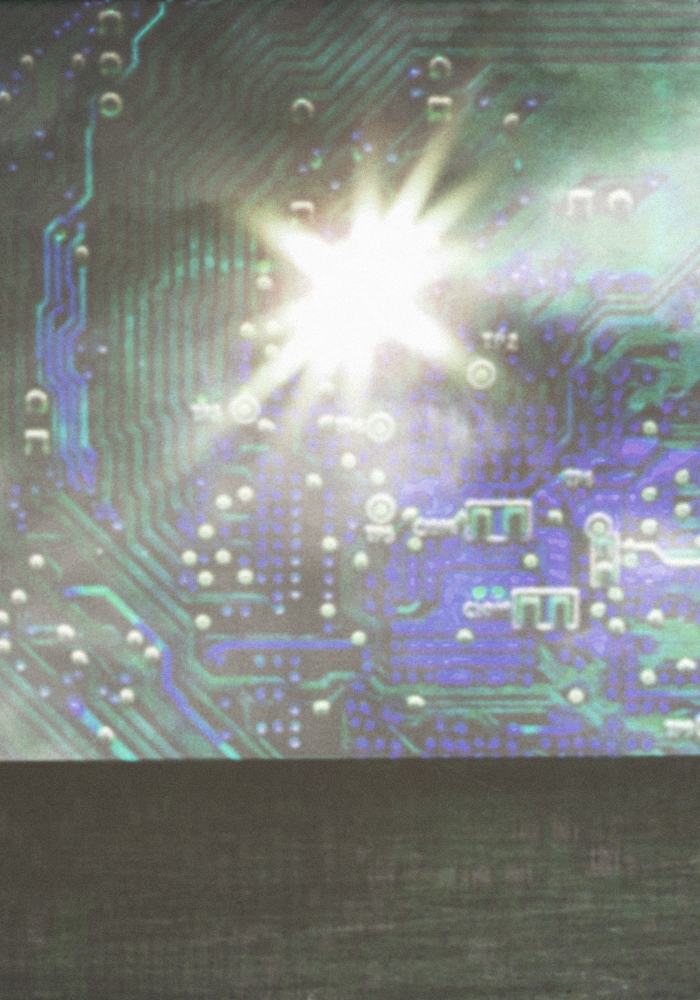